Your Trusted Podiatrist in Brisbane’s Northside

Northside Podiatry treats a range of conditions that affect comfort and movement in your feet and lower legs. From children to athletes and sufferers of chronic disease, patients are offered a holistic podiatry solution that is based on the latest evidence-based practice.

The team at Northside Podiatry Clinic is committed to proactive and preventative management of pain and issues in the feet and legs. As experienced podiatrists, they know that early checkups and treatment of minor complaints can help resolve problems quickly and simply.

Your health interests are at the heart of our consultations and treatment solutions. Following a thorough examination and assessment, your podiatrist will recommend the most appropriate management plan, based on your individual needs. If the podiatrist considers you will benefit from orthotic devices, they may be recommended as part of your treatment plan to overcome injuries and prevent them from re-occurring.

The clinic is conveniently located in Grange, just north of Brisbane’s city centre. 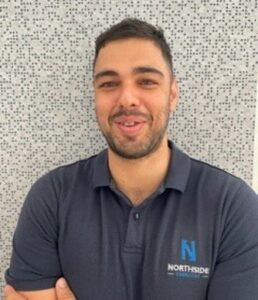 Northside Podiatry is owned and operated by Joanne Bright, who began practicing as a podiatrist in 2002. Joanne holds dual qualifications in podiatry and human movement. She is passionate about helping people stay active and reach their potential.

Joanne has previously worked in private practice, public hospitals, and community health. She has extensive experience working with patients who have been diagnosed with chronic conditions such as diabetes. Joanne’s expertise helps her to both alleviate and prevent serious complications that can result from these conditions.

As a member of the Australian Podiatry Association (Qld), Joanne regularly attends conferences and training, as well as maintaining her knowledge of the latest technological advancements in her field. She is an enthusiastic practitioner and committed to the very best evidence-based management of foot conditions.

Joanne comes from a sporting family and is a keen runner and cyclist. It’s this background that sparked Joanne’s interest in the field of podiatry. Joanne has two young children and enjoys working with children to resolve issues affecting growing feet

Sally graduated podiatry from the Queensland University of Technology in 2004. Where she was jointly awarded the ‘Brooks Texas Peak Award’, for the final year podiatry student with the greatest proficiency in sports medicine. She also possesses a Master of Public Health qualification from the University of Queensland.

Since then Sally has gained a broad range of podiatry experience working in all facets of podiatry. She has a particular interest in arthritic conditions of the foot and also the biomechanics involved with dance and gymnastics. Sally is a current member of the Australian Podiatry Association and is also a qualified practitioner of foot mobilisation and dry needling techniques.

Anthony completed his podiatry degree at the Queensland University of Technology in 2012 finishing with Honors. Since graduating, Anthony has practiced throughout Brisbane in a variety of sports medicine clinics, working alongside physiotherapists, sports physicians, and other allied health professionals, looking after elite level athletes in rugby union and Australian Rules football.

Anthony is currently enrolled in the Australian Podiatry Association Specialist Sports Podiatrist Program and is a member of the Australian Academy of Podiatric Sports Medicine. Anthony’s clinical interests also include post-surgical rehabilitation, orthotic and footwear prescription for lower limb conditions, paediatric growth related pains, and running gait retraining. Outside of Podiatry Anthony spends his time tinkering on anything with an engine, Crossfit as well as junior and women’s AFL coaching and skill development.

Sara graduated from Queensland University of Technology with Honours in 2011 and has worked in private practice ever since. She has practiced locally since 2012 and has formed trusting relationships with many local doctors and allied health practitioners.

Sara has a special interest in running and sports-related injuries, coming from a sporting background herself.

When she is not in the clinic, Sara is running around with her three little boys who are following in her footsteps with their love for the outdoors and being active.

Whatever your foot complaint, you can be confident Northside Podiatry has the experience to offer the real solution you need.

Oops! We could not locate your form.

Oops! We could not locate your form.